An Unexpected Evening of Evangelism Training

This afternoon I received a message that some "Christian people" (as I heard someone once refer to them) were going to meet in the city square for an evening of evangelism. I quickly made plans to go, since I was also hoping to do so this weekend. With all the people out tonight, it was amazing to also see so many Christians of various church affiliations out tonight passing out tracts, preaching, and just sharing the gospel with anyone willing to listen.

I met a young brother in Christ, A., who had come out for the first time to learn about street evangelism. I spoke with him about the gospel and some ways that I like to meet people and asked if he would like to accompany me. I later learned that he is a religious studies major who wants to specialize in evangelism. He asked me how long I had been doing this. It is amazing, but this blog was started seven years ago, so I have been going to the streets to share the gospel for more than ten years now.

Very quickly we met a young passerby, I., who was willing to stop and talk for a few minutes. A few minutes turned into something like a half an hour as this young man expressed his struggle with faith as the child of a Christian home who, now, after beginning a science major, finds himself helplessly agnostic. We connected right away and spoke for a long time. He seemed to grasp everything I said and everything I shared with him from the Bible, especially on the topic of faith. I recommended three churches nearby his campus where he could go to learn more. My prayer is that I will see him again in one of them and follow up with him.

My young partner and I had a very healthy discussion afterward about the gospel, languages and Biblical evangelism and apologetics. I also pray for his future in this kind of ministry as he learns and grows.

Then I met T. from Haiti. We spoke in Spanish, because he said his English is not so good yet. He would like to meet me again, so he asked if I will be there tomorrow. I told him I plan to be in the morning. In either case, I said, "Que Dios le cuide" (May God take care of you). My prayer for him is that God would lead him to know the Scriptures and read them more as God leads him in faith through Jesus Christ.

So much more I could say about tonight, but I am tired and I have some studying to do. I must say, I am grateful that God has been merciful and gracious to me, one so undeserving. I pray for the glory and praise of the Lord as He works a new creation in us, His people. Amen.
Posted by Penn Tomassetti at 10:28 PM

AoGrace Readers: Thank you all for following along!

Do you have the answer? 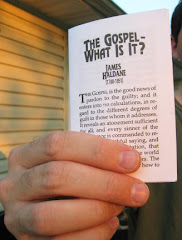 Verse 23 [Philippians 1:23] shows why dying is gain for Paul: "My desire is to depart [that is, to die] and be with Christ, for that is far better." That is what death does: It takes us into more intimacy with Christ, and that, Paul says, is gain. And when you experience death this way, Paul says, you exalt Christ. Experiencing Christ as gain in your dying magnifies Christ. It is "far better" than living here.
Really? Better than all the friends at school? Better than falling in love? Better than hugging your children? Better than professional success? Better than retirement and grandchildren? Yes. A thousand times better.
-From: Don't Waste Your Life by John Piper, Pg. 67, How is Dying Gain?, (Group study edition, 2007) 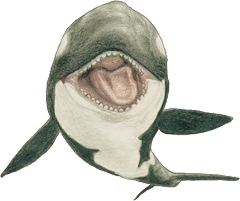 (Okay, this may only be funny to you if you are not an Arminian... If you don't know what an Arminian is, then move on to something more serious :)

Free Will Funnies, Episode One:

"Gotta' have my Free Wills."

One of America's favorite cereals is now more appealing than ever. Kellog's Free Wills have added marshmallow orcas into the bowl. Now you can enjoy your Free Wills every morning with sweet little orcas to remind you of what makes you feel so great each day... "Gotta' have my Free wills!"

Adam loves his Free Wills every morning. "Especially on days when I have a track meet or practice," he said. "I like to eat Free Wills before running. I think it helps me try my best. I gotta' have my Free Wills," he added as he proudly wiped the sweat from his brow just before starting off again.

Along with a healthy diet and a lot of activity, Free Wills will help you feel good and have the ability to choose what you want out of life.

"Gotta' have my Free Wills. They help me start my day out right," said Eva, as she carried her briefcase to the office. "I feel like I can choose what I want to get out of my life and I can make good decisions. I don't need to feel down and worry about what is going to happen next, because Free Wills provide me with a good source of energy, so I can decide to make a change for the better."

What will you decide to do today?

All Photographs, graphics and artwork displayed on this website are originals, taken either by my sister Maria, or myself. Hope you enjoy them along with the content!

Thank you for visiting.